How to Stop My Dog Annoying Other Dogs

Is your dog constantly bothering your other dog or strangers’ dogs? Do they refuse to listen to you when you tell them to stop? Are you unsure if they’re just trying to play or if something worse is about to happen?

Well, the good news is that this is a common issue with dogs, so there are well-known answers — and solutions — to all of these questions and more. So keep reading, “How to Stop My Dog Annoying Other Dogs,” and we’ll cover everything you need to know! Let’s get started now!

How Do I Stop My Dog from Annoying Other Dogs?

And who are they disrespecting? You, actually. While it may seem strange, it makes sense if you just think about it.

When your dog refuses to listen while annoying other dogs, they are not respecting your leadership role. They are basically saying to you, “I don’t have to listen, because I’m in charge, so I’m going to keep doing what I want.”

And in this particular case, what your dog wants is to annoy other dogs. But I’m sure this disrespect of your leadership is showing up at other times too. They’re probably also barking excessively, pulling on the leash, tearing things up around the house, or marking in the house.

You might already be experiencing some of those other misbehaviors, but if not you could be soon if you don’t address your dog’s issue of not respecting your leadership now.

It’s important to do so because this is how dogs work. You’ve probably heard before that dogs are all pack animals, and that in every pack there is a pack leader. Right now, your dog is clearly assuming this role since they feel it’s apparent you’re not up to it.

But the good news is you can quickly turn everything around and get your dog to stop annoying other dogs, as well as any other behavioral problems you’re likely having (or will soon).

I’d recommend an excellent free video series that’s on just this subject — how to be your dog’s pack leader — by a renowned trainer named Dan. In it, he’ll teach you everything you need to know to get your dog’s respect, and he does so in a 100% humane and loving manner at all times.

Start watching Dan’s free training series now by clicking here. And don’t worry if you don’t have any experience with this sort of thing, because he makes everything very easy to understand and teach to your own dog, and he gets right to the point so you’ll start seeing results in no time!

Why Does My Dog Like to Annoy My Other Dog?

Your dog likes to annoy your other dog because they are excited and just don’t know limits or because they have dominance issues, possibly both. It’s important to pay attention to the body language of your dog while it’s happening to determine for sure.

If your dog will not leave your other dog alone and is doing so while jumping around, wagging their tail, and doing a play bow, then they are being annoying because they just want to play.

If your dog won’t leave your other dog alone and is doing so by taking things from them, getting in their way, and other similar behaviors, then they are trying to dominate your other dog.

Why Does My Dog Like to Annoy Strangers’ Dogs?

Your dog likes to annoy strangers’ dogs because they are trying to play or assert dominance. Look to clues from their behavior to determine which exactly.

If your dog is just looking to play they will be dancing around, jumping, wagging their tail, and doing a play bow. If your dog is annoying a stranger’s dog by doing things like getting in their way or being aggressive, then they are showing dominance.

Both need to be addressed, particularly the dominance. Left unchecked, your dog attempting to dominate a stranger’s dog will lead to them barking aggressively and even snapping at the dog or attacking them.

Will My Dog Grow out Of Annoying Other Dogs?

Your dog will not grow out of annoying other dogs, even if they’re currently a puppy, and regardless of why it’s happening. It needs to be addressed through behavioral training or the problems will only continue and escalate.

Many people may have observed a dog seeming to grow out of this behavior (especially puppies), but the reason it actually stopped was due to it unknowingly being handled in other ways.

For example, a puppy may have stopped being annoying to other dogs because behavior training was used to address other common issues they had, and in turn, it helped the puppy gain control of their problem of annoying other dogs.

I’m sure you’re eager to stop your dog from annoying other dogs, so I’ll let you get started. Good luck with everything, and thank you for reading our article “How to Stop My Dog Annoying Other Dogs!”

How to Stop Dog Barking at Llamas

How to Stop Dog Barking at Alpacas 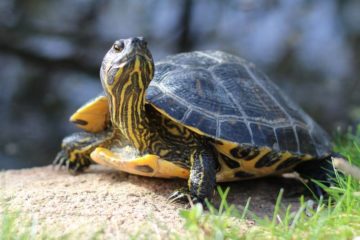 How to Stop Dog Barking at Turtles

How to Stop My Dog Annoying Other Dogs